From Playa del Carmen, we moved north up the coast to Isla Mujeres. I had heard from other travelers that it was a cool, chill place to hang, much better than Cancun. Rich and I went to give it a shot. We took a collectivo to the Cancun bus station (MEX$30/$2.50USD), connecting bus (MEX$8/$0.75USD), climbed aboard the passenger ferry (MEX$70/$5.85USD) and left the mainland behind. En route we suffered through some live entertainment (does anyone really dig pipe flute music?) and arrived on the island in about ten minutes.

We stayed on the northern tip of the island and hung out at Poc-Na, the local hostel that has a beach party every night and is a great place to meet people. My first impression of downtown was just how tourist-focused every single business was. It didn’t have the same plastic quality as Cancun, but everything on the main walking boulevard of Avenue Hidalgo was designed with the American tourist in mind. Knick knack shops and dinner specials quoted in USD, all with American price tags to match. We did find a few restaurants tucked away that served cheaper food–with tortas priced at a pretty standard MEX$25/$2USD–but most closed down for dinner. The best reasonably priced late night option we found was a taco stand outside the grocery story on the center plaza. Tacos loaded with toppings were MEX$15/$1.25USD, double the price of Tulum but half the price of other restaurants.

The first really special thing that happened on Isla Mujeres was my adventure swimming with whale sharks, detailed in a separate post. Super awesome! If you come to Isla Mujeres during the summer months it is a must-do.

I was getting a little jaded by the beachy lifestyle, but I would soon get over the slump. Back at Poc-Na we were generously invited to a private house party being thrown by a group of Americans from Georgia. We arrived just in time to watch dusk descend on Cancun just over the water. The house was beautiful, our hosts an awesome group of guys, and the atmosphere a fun change from the hostel beach parties. We all hung out chatting, having a great time. I lamented my lack of skinny dipping on this trip to a very cute Swede and suddenly I had a partner in crime. On the count of three… splash! And skinny dipping is like dominoes; once one falls, it’s not long before you’ve got a pool full of naked people dancing to “Thriller”. Excellent, and you’re welcome. 😉

The next morning, I was super happy after having WAY too much fun the night before. Keeping my excellent mood going, we splurged on breakfast at a restaurant I had been eyeing: Rooster Cafe. Eggs benedict all around please. Um, yeah, it was so fantastic of a breakfast feast that I went there every morning for the next two days. So delish!

Earlier we had linked up with James, Rich’s friend from traveling in Argentina, and Helen, who we convinced to join us on the whale shark excursion. They were excellent friends to hang with throughout the week. We had a delightful surf ‘n turf double date with them on their last night on the island before they headed to Tulum. 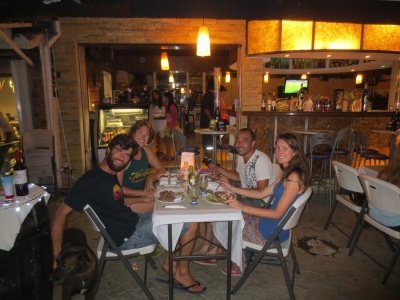 As my plane flight approached, I got the urge to do one last day of diving while I was still able. We did two dives off Isla Mujeres: Gunboat C58 and Punta Sur. Diving the current off Punta Sur was unreal. I had never experienced current like that before. Someone asked me recently if diving feels like flying. In normal conditions I’d say kind of because you can move in all directions, but this current most definitely felt like FLYING! It just took me, swept me away and was incredibly fun.
Alright Isla Mujeres, I was skeptical at first but you got me. Adventures, cool people, and beautiful scenery. You are indeed la isla bonita.