A week ago, I walked outside my house to go to work and found my car was gone. I looked around to make sure I wasn’t crazy, left a note for the neighbors, called the primary Seattle tow company, then the police. Within an hour an officer was in my living room filing a stolen car report. When I told him the make and model he nodded; late 90’s Hondas are notoriously easy to steal. Thieves break in in under a minute and start the car with a screwdriver. Great, now they tell me! So, what are my chances, officer? He said stolen cars are recovered “more often than not, and more often than not are drivable”. In fact, 85% of stolen cars in Seattle are recovered, indeed most in driving condition. I already felt on the bad side of luck, but was hopeful.

There isn’t a lot you can do when you car gets stolen, but I took a few extra steps. My housemate posted on our neighborhood watch board. I recruited the garbage and mail men to keep an eye out on their routes. My sister canvassed my neighborhood with me for over an hour looking for my car the day it disappeared. As I scanned cars we passed, she pontificated on car modification techniques she would perform to disguise a stolen car and measures she would take to not get caught. I pshawed. They weren’t that tricky, right?

I spent a week wondering, keeping an eye out everywhere I went. My supervisor and friend at my part-time job was incredibly generous and trusting to loan me his mother’s car for a few days. I received emotional support and disbelief from my friends and co-workers. I shared my stolen saga with a friend and he mentioned there might be a stolen car dumped in his neighborhood. (Something I never would think about–if a car looks abandoned, it’s worth giving the police a heads up just in case it’s stolen!) He notified the police, they picked it up, and he sent me his car karma. But chances of recovery statistically dwindled by the day. After a week, I started believing poor little Ginger was gone for good and began planning longer term transportation options.

Then, after dinner with my housemates at about 10pm, I received a voicemail from an unknown number. The sheriff! He told me to get down to Dearborn and 5th, by the stadiums: they found my car. My housemates and I raced to the scene. Unexpectedly, we found my car at a gas station surrounded by sheriff cars with their lights on. They had apprehended the thieves while they were driving my car. This was no joy ride theft (the most common scenario); the thieves had been planning to keep it. They swapped my plates with those from another another stolen car, removed the roof rack and other identifying features, just as my sister would have. They even decorated the rear view mirror with good luck tchotchkes. I anti-identified the tweaker driver (“nope, don’t know him and did not give permission to drive my car”) who was in custody.

I was shocked to get my car back, I really thought she was gone for good. The good news was she was certainly drivable, but the inside was a mess. All my possessions–save my ice scraper and a pair of shoes in the trunk that went undetected–had been thrown out and replaced with criminal crap. It reeked of cigarette smoke. We found various spills throughout, including tapioca pearls all over the center console and unidentified green goo on the passenger side. The police provided us with trash bags to cover the seats, plastic gloves, and anti-bacterial wipes. We rolled the windows down and drove off. 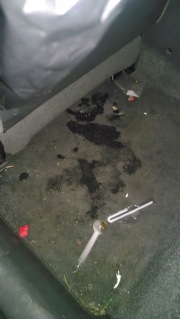 Back at home we inventoried the car. The cops didn’t want any of the stuff as evidence so tasked us with disposal. Time to loot. Highlights of the haul include shaved keys, bolt cutters, crowbars, other heavy duty tools, crack pipe, bowie knife, ski masks, many pairs of gloves, two prepaid cell phones, sugary cereals, watermelon, fast food trash stuffed in every corner, a Wii, computer accessories, and a shit ton of ramen noodles. As my friend Wendy said “Also: mouthwash. Because you don’t want your breath to smell like meth and Trix.” 😛 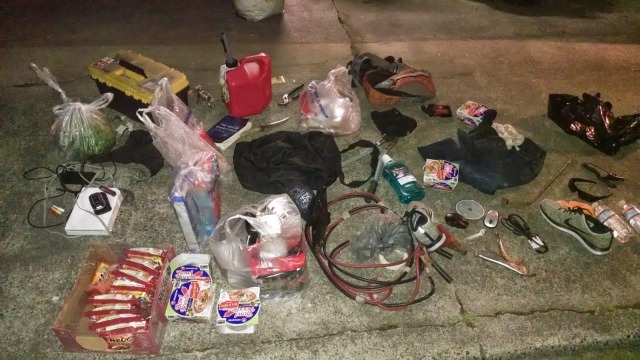 While the car was missing, I didn’t have an emotional reaction to it being stolen. People who I told were often more outraged than me. But I felt like a victim once it was returned. I’m in the process of getting the car cleaned and road-worthy, and notice small reminders of violation constantly. They adjusted my steering column angle. There’s a burn hole in the driver’s door from a cigarette; they used many surfaces as ash trays. The passenger’s visor is now busted. They superglued my AC button down (thanks guys, who needs fuel economy?). The plastic casing around my radio has been cut, even though the radio is in tact. All of my radio presets were changed to crappy pop music. Tonight I reset them all to the one station; I didn’t want to have any connection to the thieves, not even the music they listen to.

I’m very thankful to the police. It feels the same as when my tire blew out on the highway and the DOT Incident Response Team came to my rescue. There are so many people out there working to serve and protect who have your back if something bad happens. Feels really good we live in a society where that is the case. I heart public services.

I got new plates and registration, had the interior ultra detailed (super expensive!), and bought a club. I feel angry now. I want to do all in my control to make this guy regret stealing my car. I’m interested in the upcoming criminal proceedings and my options to participate. It’s difficult for me to understand blatant disregard for other people and property. Even if it’s stolen, why trash it? Fuckin’ jerk.

2 thoughts on “Erin’s car gets stolen”